The Silent Heroes of the Second Revolutionary War

As reality sets in after two years of the Trump presidency, reality has begun to impinge on the fantasies being pushed on the people.

Taking their cue from a Hillary Clinton campaign ad, thought elites regularly identify Patriots with extremism and bigotry. Anyone who espouses conservative thinking is tarnished with this brush. For example, the Program on Extremism at George Washington University in recent years published a white paper purporting to describe concerned Patriots as dangerous extremists with false views. Militias, a logical response to out-of-control border areas or street gangs, are termed “breeding grounds for hate.” And the Anti-Defamation League specifically applies the term “hate” to those with non-Left points of view.

But as reality sets in after two years of the Trump presidency, reality has begun to impinge on the fantasies being pushed on the people—most prominently, giving birth to the “Walkaway” movement (led by a gay man) and the “Blexit” (Black Exit) and “Jexit” (Jewish exit) or “Jexodus” movements as well.

Today, I was getting my morning coffee this when a woman (who happened to be a woman of color) saw my “Patriot” mug and asked me about the logo and my book. In response, I said that it was about our current undeclared civil war.

“When you say that we are in a civil war, what do you mean?” she said.

How do you condense three to ten years of research into a single sentence?

So I said: “I mean the desperate opposition to President Trump, which is really opposition to America. And at the same time saving children from human trafficking, which goes on because of corruption.”

Her eyes registered confusion at the first point, and recognition of the second. Multiple women of color, and one friend who is an Indigenous American, have told me that someone either tried to kidnap them as children in poor neighborhoods, or that they knew of such things and were concerned about why children seemed to be easy prey. One actually went on to become an activist against human trafficking.

This is why the Trump Administration’s fight against corruption, and its fight against human trafficking and child sex trafficking in particular, need to be seen as one thing. The President has gone to war with the predators on every front, particularly legislatively and financially.

Logic Dictates The Awakening and Its Questions

Today, July 6, 2019, after multiple earthquakes hit California, the governor declared a state of emergency there. I believe that these earthquakes may be man-made, specifically the Trump Administration destroying deep underground military bases (DUMBs) with classified projects improperly involving children. Please note that this is only a hypothesis; the purpose of this article is explore it.

On December 5, 2011, an article appeared which asserted: “The Second American Revolution is secretly being fought—deep underground. U.S. soldiers are battling the CIA, Xe (BLackwater) mercenaries, FEMA and DHS agents and foreign troops (brought into the United States through the Denver International Airport DUMB).”

Until reading this, I thought underground military bases were possibly just a conspiracy theory. Further research yielded clarification, as more than three decades ago, in 1987, Lloyd A. Duscha gave a talk at a conference for engineers called “Underground Facilities for Defense—Experience and Lessons.”

At the time, Duscha was Deputy Director of Engineering and Construction for the U.S. Army Corps of Engineers. (It is reprinted in this book.) He stated: “After World War II, political and economic factors changed the underground construction picture and caused a renewed interest to ‘think underground.’…I must deviate a little because several of the most interesting facilities that have been designed and constructed by the Corps are classified.”

What is going on in these deep underground facilities? We are not allowed to know; as such whatever does appear typically looks somewhat homemade, extreme, “wonky,” and weird. (See here for example.) Does that make the information false? No; who would advertise the existence of such a thing?

Is it possible that someone is harming children as part of military experiments? Clearly, if we do not know what is going on, then anything is possible. (Recall when a group called Veterans On Patrol found a child trafficking camp with underground elements; was quickly discredited; and the site was reportedly demolished; the group that found the children claimed to have found and handed over forensic evidence.)

When Isaac Kappy died on May 13, 2019, a user going by the handle @yigsstarhouse posted the following comment to Twitter, quoting him: “Isaac Kappy: ‘What I did was DUMB….DUMB, DUMB, DUMB.’ Jumps from bridge in Bellemont, AZ where there just so happens to be a: Deep Underground Military Base >DUMB“

What is the connection between secret government programs such as classified DUMBs (see also here, here and here) and “Pizzagate,” “Pedogate,” child sexual exploitation, child sex trafficking, human trafficking, satanic ritual abuse, illegal and unethical experiments, and so on?

Perhaps nothing. But I remember when fearless child advocate, journalist and survivor of relationship abuse Liz Crokin said that she had received a tip about “children in cages.” (I do not have the link to video or a document proving this statement.) Crokin was a well-respected journalist until she started advocating for children. It is well-known that Crokin has been harassed and smeared for her work and claims.

“Children In Cages” and Immoral Equivalence

In any case, the term “children in cages” is very important to political radicals passing themselves off as Democrats. They are working hard to establish immoral equivalence between President Trump and his Administration, and “the swamp.” As such, they accuse him of “keeping children in cages,” although the reality is far from this.

(See comment here, for example, attacking Liz Crokin for speculating that wildfires in California were actually intentionally set by pedophiles to hide evidence. The person wrote: “Hey conspiracy theory a**holes, you support a guy who literally locked children in cages, you don’t get to decide what is right for children anymore!”)

In reality, the “cages” belong to an earlier era. The 2008 Trafficking Victims Protection Act (TVPA) creates a loophole in the deportation process for children who are from countries other than Mexico or Canada (at the time, the main focus was on countries south of Mexico at risk of being trafficked). The law was already considered out of date by experts in 2014, well before President Trump took office.

Per the Department of Homeland Security, this loophole has been exploited by bad actors and needs to be closed up so that only trafficking victims benefit from it, rather than all minors crossing without parents, who may or may not be victims.

No matter what the reality is, corrupt politicians and the media who amplify their messages must cling to the narrative. This is so no matter how many times you remind them that former President Bush passed the law and former President Obama was the one who implemented the family separation policy.

Many people, myself included, believe that there was a “16 year plan to destroy America.”

On December 5, 2011 (well into the first term of the Obama presidency; early on in this phase) someone published the article mentioned above, mentioning a “revolution” already underway, and the demolition of the Deep Underground Military Bases (DUMBs) was a primary element in this effort.

The author claimed that “evidence of these battles are presented daily through the USGS earthquake maps. Shallow, poorly constrained earthquakes at depths of 3 to 4 miles are, in all probability, caused by massive underground explosions at these DUMBs or their connecting tunnels.”

If this is true, the USGS denial of man-made earthquakes would seem to tie into the desire to conceal information.

If Patriots in the military were fighting back against a coup already in 2011, it would also support the contention by Jerome Corsi that the military was ready to take back the country by force in 2016 but agreed to step in and do things the normal way by recruiting Donald Trump as a candidate. Former State Department official Steve Pieczenik meanwhile referred to Hillary Clinton as attempting a “coup” and the transmission of documents to Wikileaks a “counter-coup” intended to stop her. (Here is another link on that.)

(As Divine Providence would have it, Hillary Clinton was so overconfident that she would win that she welcomed the Trump candidacy, envisioning him as a “Pied Piper” who would attract attention, but be easy to beat.)

In any case, the anonymous article further goes on to claim that:

“USGS earthquake maps have been recording these battles since August 23, 2011, the 1st day of the Second American Revolution.”

Specifically, on August 23, 2011 “the United States Air Force intercepted a number of improvised nuclear explosive devices that were being transported by CIA / Xe forces via the DUMB underground tunnels to targets in New York City and Washington DC. The CIA / Xe planned on detonating those nukes in New York City and Washington DC as part of 9/11 anniversary false flag events. The false flag attacks were averted when the nukes were prematurely detonated during the underground battles between the United States military and CIA / Xe forces.”

The author states that he was “pointed to this piece of evidence by someone who claimed to be with the United States Air Force (see screenshot). 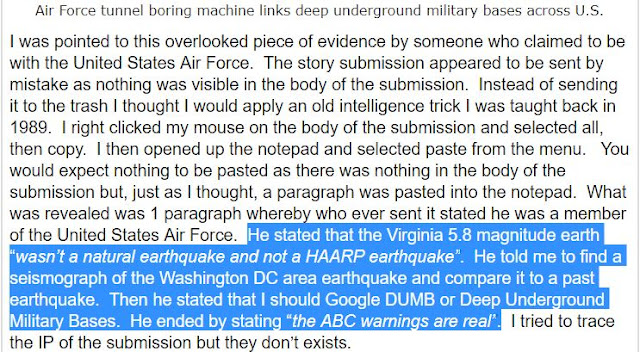 A commenter to the article responds to the obvious question of how they would excavate tunnels underground without us seeing evidence above ground. They point us to “United States Patent 3,693,731 – METHOD AND APPARATUS FOR TUNNELING BY MELTING,” granted in 1972 to the U.S. Atomic Energy Commission.

On August 23, 2011, The Air Force stopped the attacks on DC/NY. On May 30, 2019, the President delivered the commencement speech to graduates of the Academy. He stated: “You are ready to fly, fight, and win!”

The President’s words are even more poignant when one remembers the brutal events of September 11, 2011. I believe that when the attackers failed to take down DC and New York, because the Air Force detonated their nukes, the plan changed and they attacked our consulate in Benghazi, murdering Ambassador Christopher Stevens and those with him: Tyrone Woods, Glen Doherty, and Sean Patrick Smith.

As such, the below photo is completely manufactured. 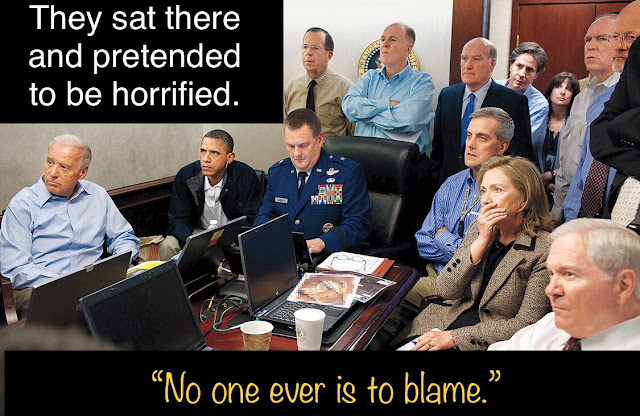 Note: This post has been updated to correct some minor typos and add some links. Of course, today’s discussion does not prove that California’s earthquakes are unnatural, rather it only provides an interesting alternative view to pursue. Read the full thread here.

Image by spencer from Pixabay.

If they could do this to General Mike Flynn, what do you think they had planned for you?

Fighting for Peace Part I, January 2020: Unedited Work In Progress by Dr. Dannielle Blumenthal. The author hereby releases this content into the public domain.

New Book! One Crazy Year: Remembering the Attempted Coup of 2019

A new book by Dr. Dannielle Blumenthal. A set of essays reflecting on the crazy year that was 2019. Released to the public domain on February 1, 2020.

Nearly ten years ago, Border Patrol Agent Brian Terry and ICE Agent Jaime Zapata were murdered as a result of a botched government conspiracy to push gun control. At the time, I was a public affairs specialist at U.S. Customs and Border Protection, which oversees the Border Patrol.

On October 5, 2017, The New York Times published an in-depth investigation of Hollywood producer Harvey Weinstein, with a focus on his alleged sexual harassment of young women over a period of many years, and “at least” eight settlements reached, presumably at the cost of the victims’ silence.

From Ordinary Citizen to Patriot

The alt-right market is a rising force in the American publishing industry, a market that major publishing houses are just starting to tap. With the dawn of 2019 and America’s deep polarization showing no signs of abating, a powerful new memoir speaks to that market.